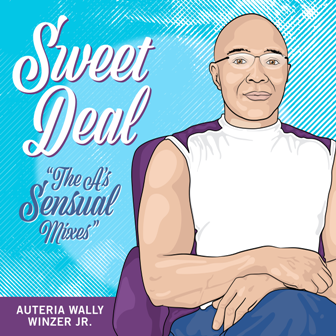 Last year Auteria decided to strike out on his own with the single ‘Be As One’. The soulful ballad was a duet between Pam Neal & Melecio Magdaluyo and enjoyed US chart and radio success. More singles followed and now all the singles and much more have been put together into one big album…. ‘Sweet Deal’.

Working like Norman Connors back in the day and more recently James Day, Mr Winzer uses  a team of top players and vocalists to help him flesh out his musical ideas and the lengthy long player moves easily from tender and sweet love ballads to feisty and funky 80s style electro funk work outs. There’s plenty of old school finger-clicking soul too – the opener, ‘Operator’ is a good example with the vocalist, Jesse James offering a wonderful Levi Stubbs flavoured attack. However that song comes in two versions and in some ways that’s the problem with ‘Sweet Deal’. It may sound odd, but there’s just too much. For instance there are four edits of ‘Be As One’ and five of ‘Overnight Sensation’. It becomes a little confusing. That said, with patience you’ll discover some great soul –especially amongst the ballads, like the classic harmony ballad ‘Special Love’ with vocals from the Hartfield Brothers and the more dramatic ‘Something To Believe’ which features a Gerald Albright sax cameo. There’s plenty too to please fans of 80s electro dancers. ‘Dance All Night’ is the obvious example… a real Whitney flavour to this.