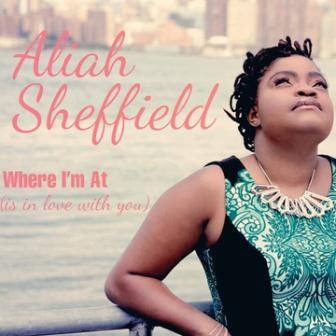 Soul connoisseurs know all about indie Philadelphia label, SOUND GEMS. The label, set up in 1974 by Frank Fioravanti, is best known for the global hit ‘Be Thankful For What You Got’ by William DeVaughn. Now, forty years after that iconic release, Sound Gems remerges with some brand new music.

The artist leading the renaissance is singer/songwriter ALLAH SHEFFIELD. Born in Newark, New Jersey and raised in Savannah, Georgia, Aliah has always been a singer. She cites her musical influences as Deniece Williams, Donny Hathaway, Aretha Franklin and Patti LaBelle, amongst others. In high school, she was encouraged to explore the piano as she discovered her songwriting abilities and while studying film scoring at Berklee College of Music she began to experiment with fusing genres, particularly soul and R&B, to create her own keyboard driven style.

December 2nd sees Aliah release her debut single – ‘Where I’m At (Is In Love With You)’ and ‘A Million Tears’. The former is a brisk, mid-tempo groove with a some catchy piano while the latter is a tad statelier allowing Ms Sheffield to display her soulful credentials to the full. Both tunes are great examples of 21st century Philly soul… contemporary but with a respectful nod to the city’s Golden Age.

Label boss Frank Fioravanti says: “There’s something remarkable about Aliah’s voice. She has that special something that appeals to listeners who might not have ever given soul music a chance.”

Find out for yourself via the usual download portals.