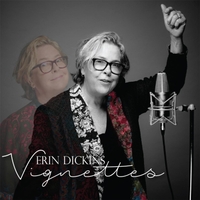 New York based jazz stylist ERIN DICKINS was a co-founder of Manhattan Transfer and at the end of March she releases her latest solo long player, ‘Vignettes’. The ten tracker, released on the wonderfully named Sizzle and Swing label, is an interesting concept on which Ms Dickins sets out to show her range, diversity, and vocal artistry via an eclectic selection of covers on which she’s joined by an equally eclectic guest list.

On some of the tracks Erin is accompanied solely by the guest. So on the lovely Frankie Laine ballad, ‘We’ll Be Together Again’ it’s just Erin and pianist Stef Scaggiari while on the cover of Annie Ross’ ‘Jackie’, it’s Erin accompanied by Hawaiian bassist Bruce Hamada.