WHAT CHA GONNA DO FOR CHAKA? 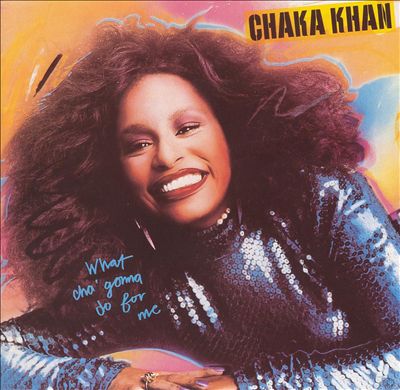 Fans of the ever lovely CHAKA KHAN will be delighted to learn that her 1981 Gold-certified long player ‘What Cha’ Gonna Do For Me’ has just won reissue on Cherry Red’s bbr imprint.

Originally released on Warner Bros, the title track was the first single and quickly became an R&B #1 and it sees Ms K in full flow; the follow up, a jazzy version of the Beatles ‘We Can Work It Out’, was also a chart rider as were the gentler ‘Any Old Sunday’ and the groove-laden ‘I Know You, I Live You’. The B side to that particular single was actually the album’s most ambitious track – ‘And The Melody Lingers On’ which, of course, was Chaka’s reading of Dizzy Gillespie’s jazz standard ‘Night In Tunisia’. Chaka chose the song as her tribute to her jazz heroes and, cleverly, producer Arif Mardin inserts a classic Charlie Parker sax solo into the track while Herbie Hancock adds a scintillating synth solo.

As with most modern reissues the set also boasts some bonus tracks. Here you can enjoy the non-album cuts, ‘Only Once’ and ‘Lover’s Touch’. They were the B sides to the first two singles. To add to the enjoyment there’s also a seven minute plus Tony Humphries remix of ‘I Know You, ‘I Live You’.