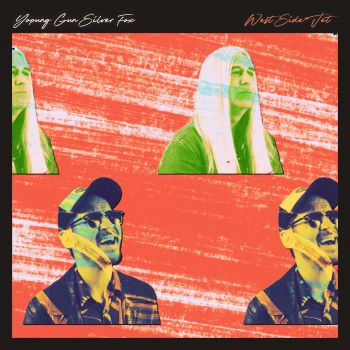 YOUNG GUN SILVER FOX (the creative pairing of Mamas Gun front man Andy Platts and eclectic performer/writer/producer Shawn Lee are preparing a new album, their fourth… ‘Ticket To Shangri La’ – out October 21st via CANDELION. Their people tell us that the album will once again be replete with sophisticated, blue sky sounds and positive vibes – a mix of blue-eyed soul, West Coast harmony pop and a lot more!

The quite lovely song started life in Shawn’s London studio and became an instant contender as the first introduction to the album. “When Andy sent me the vocals I was honestly like ‘this is the first single!’ We hadn’t even finished the album yet but it was instant.” Andy adds: “Lyrically I knew I didn’t want to do anything romantic; it can’t be about the dancefloor it can’t be ‘I love you, break my heart’ etc. it needed to be something different. The only musical I really like is ‘West Side Story’ and I’d watched the original again recently so it’d come back into my consciousness just how brilliant the music and writing was, so it was just a bit of a nod to my fondness of that as a piece of music”.

‘West Side Jet’ is out now and comes recommended!