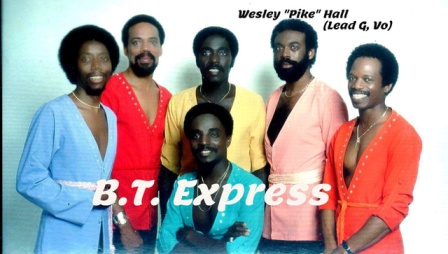 Though details are scant, it seems that WESLEY “PIKE” HALL, JR, guitarist and singer in 70s funk band B.T. Express has died.

His band emerged from the Brooklyn music scene in the 70s and played under many names including King Davis House Rockers, The Madison Street Express and Brothers Trucking which soon became B. T. Express. After some local success, the band enjoyed a huge hit with the Jeff Lane helmed ‘Do It (‘Til You’re Satisfied)’. This was followed by ‘Express’ and several lesser hits like ‘Give It What You Got’ and ‘Can’t Stop Groovin’ Now’ both of which featured a young keyboardist, Kashif.

By the 80s success was harder to find and the band fragmented and Hall went on to form the Pike Band and we believe that he continued to work in music in and around New York.