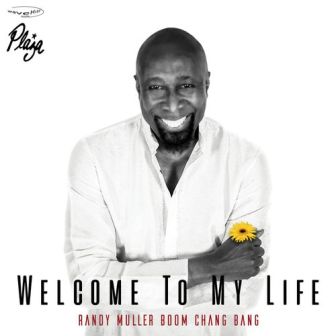 Soul and funk legend RANDY MULLER has enjoyed something of a renaissance of late. The man who gave us bands like Brass Construction, Skyy, BT Express, and and First Circle had been off the radar for a while. A couple of years back he re-emerged mentoring a band called Brooklyn Soul Biscuits, and then we learned he was tied up in all kinds of production work. Then in January this year he was back with an outfit called Brooklyn Groove Machine whose ‘Disco Holiday’ was well received. Then in August we were offered a wonderful double A sided single from another Muller creation…”Randy Muller Boom Chang Bang.”. The single coupled a glorious Angela Johnson vocalised ‘Joy In Da Rain’ alongside the disco romp ‘Groovin’ U’. We were told that that latter was from a previous Boom Chang Bang album from way back in 2007 but that album seemed to have slipped past us!

Whatever, the good news is that Randy Muller Boom Chang Bang is back with us and the new album that is ‘Welcome To My Life’ is every bit as good as we thought it was going to be from the evidence of that LP heralding single in August. ‘Joy In Da Rain’ still sounds good and there are plenty more soulful romps like it… try ‘So Happy’ (featuring GQ vocalist Raheim Le Blanc) or ‘Slip N Slide’.

‘Welcome To My Life’ though is an album of many moods amongst them Brazilian bossa (‘Brazilian nights’ and ‘Something Simple’), smooth jazz (‘Over And Over’ and ‘Summer Luv’), funk (‘Booty Bump’) and dramatic ballads (‘I Cry’). Right now I keep coming back to the simple and innocuous ‘Pimms And Lemonade (London Nights)’… a sort of cross between ‘Walking In Rhythm’ and Light of the World’s ‘London Town’. It’s a classic summer sound – and that’s my only criticism (and not really a criticism). ‘Welcome To My Life’ is a BIG summer album – full of optimism and positive vibes, so maybe its release is a wee bit too late. On the other hand – I can guarantee, though, that if you listen in it will brighten up and add considerable cheer to your life as those nights draw in and the heating gets switched on. Welcome to Boom Chang Bang!