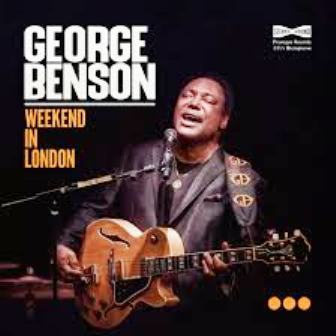 It was way, way back in 1978 that GEORGE BENSON released his ground-breaking ‘Weekend In LA’ album. Recorded live at the city’s West Hollywood Roxy Theatre, it cemented (after the success of ‘Breezin’’ and ‘In Flight’) his new status as not just a jazz guitarist but also a remarkable soul singer too.

Now over 40 years later, Benson is due to release a new live “weekend” album… ‘Weekend In London’. The set was recorded live at Ronnie Scott’s Jazz Club last year and producer Kevin Shirley says: “We captured a lot of the atmosphere on ‘Weekend In London’. It was very crowded, like it always is at Ronnie Scott’s, no matter who’s there. We were almost touching as we were playing, people all up on the bandstand. But I’m always happy to be in those surroundings. A lot of big Benson fans were there – and some of the screaming ladies. It was a fantastic night.”

The album showcases 14 songs from across Benson’s career, He kicks off with ‘Give Me The Night’ and ends with ‘Cruise Control’ and in between you can enjoy things like ‘Love X Love’, ‘Love Ballad’, ‘In Your Eyes’ and the evergreen ‘Moody’s Mood’. Benson even includes material from his more recent releases, like ‘I Hear You Knocking’. Yes, the repertoire might be different to the LA live album and indeed very different to when he debuted at Ronnie Scott’s 45 years ago but he can still sparkle. Yes, the voice might betray the passage of time, but the guitar playing still shines and, well…. it’s George Benson. As the MC for the night says: “You don’t get stars this big in rooms this small very often, ladies and gentlemen. Please be prepared to be dazzled – Mr. George Benson…!”