WE WILL MEET AGAIN…. 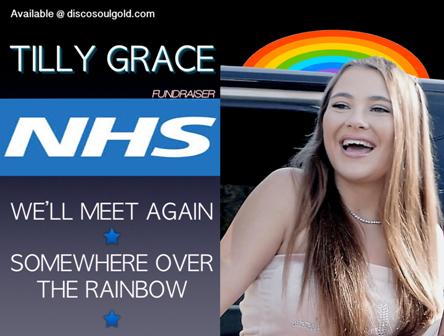 TILLY GRACE is a Brit, blue-eyed soulstress… you may remember her ‘Chill’ and ‘Soul Man Theme’. Both were collaborations with the DSG label and were mixed my mix master Nigel Lowis.

Now, in middle of the lockdown, Tilly returns with a very special version of the old Vera Lynn song, ‘We’ll Meet Again’.  The story is that the recording was initated by Tilly’s mum, who after watching the Queen’s speech a few weeks ago, suggested that Tilly record a modern version of the wartime classic and with the help of the aforementioned Mr Lowis, that’s exactly what she’s done. Sounds odd, yes… but it really works. This new version is gentle with a subtle Philly ballad flavour and a lovely harmonica hint at the end that helps capture all the song’s poignancy. The B side is new version of ‘Over The Rainbow’ – which adds more poignant appeal.

Both cuts will be available from tomorrow – Friday 8th May… very appropriate… the 75th anniversary of VE Day. It can be downloaded from www.discosoulgold.com absolutely FREE. The label though is asking for donations to the NHS and they have already raised just over £600 even before release! Well done Tilly! Well done Nigel! Well done DSG!