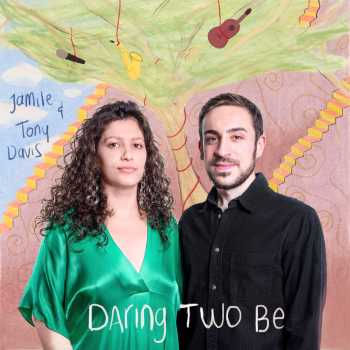 JAMILE is a Brazilian vocalist currently busy promoting her upcoming album – ‘Daring Two Be’, a collaboration with guitarist TONY DAVIS whom the singer first met working in and around the New York jazz club scene.

‘Daring Two Be’ is a concise, unpretentious 10 tracker which offers the duo’s readings of a varied selection of standards, classic jazz and soul. Amongst the jazz/standards are ‘September In The Rain’, ‘Day In Day Out’ and ‘Never Will I Marry’ while the soul connection comes with covers of Aretha’s ‘Dr. Feelgood’ and Stevie’s ‘Until You Come Back To Me’ and ‘Moon Blue’ (the former recorded famously, of course, by Aretha; Jamile is obviously a fan of both Ms F and Stevie!). The album’s Latin  tunes are ‘Mirame Mas’ and ‘Samaba Del Rei’ – that last one with added sax appeal from veteran US jazz player, Steve Wilson. Wilson is also featured on the aforementioned ‘Dr. Feelgood’. Apart from those two cuts, it’s exclusively Jamile’s carefree voice  and Davis’s gentle guitar. That pairing bringing new perspectives to the familiar.

‘Daring Two Be’ is released July 8th via La Reserve.