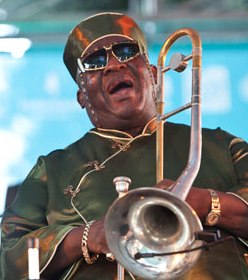 Soul and jazz trombonist, writer, arranger and producer, WAYNE HENDERSON died in Los Angeles on Saturday 5h April. He was 74. The news was posted on the internet by Wayne’s long-time friend, the soul and jazz singer, Jean Carne. She wrote; “I spoke to Wayne Henderson Jr. who confirmed that his Father, Wayne Henderson, founding member of the Jazz Crusaders, passed away last night in LA. I have yet to imagine Music without our Wayne. I miss, already, his friendly, energetic and genuine Persona, the way the stage/ room glowed when he entered, the love and adoration that audiences and we, his colleagues lavished upon him. My Prayers and condolences are with his beautiful Wife, Cathy and his amazing Family. Rest in Eternal Peace, Dear Friend.”

Henderson was born in Houston, Texas in September 1939. In 1961, with childhood friends Wilton Felder, Joe Sample and Nesbert “Stix” Hooper, Henderson founded the Jazz Crusaders. Their “crusade” was to make jazz maybe more accessible by fusing funk, soul, gospel and Latin elements with the intricate basics of jazz. Before that Wayne had worked with bands called the Black Board Jungle Kids, the Swingsters, the Modern Jazz Sextet and the Nite Hawks, but it was the Crusaders (the “Jazz” was eventually dropped) that became the trombonist’s chief legacy.

The Jazz Crusaders first record deal was with Pacific Jazz where they stayed till 1971. They then signed to ABC/Blue Thumb, shortened their name and adopted a funkier, more soul-based sound. . With this new style came increased crossover appeal, but in 1975, following the release of their 28th album Henderson left the group to pursue a full-time career as a producer, though still releasing his own albums – notably 1977’s Big Daddy’s Place’, 1978’s ‘Living On A Dream’ and ’79’s ‘Emphasised’ .

In 1995 Henderson reconvened a new line up of the Crusaders and his new group were regular visitors to the UK… sometimes working with Jean Carne. In more recent years Wayne worked with the California College of Music in Pasadena, California.