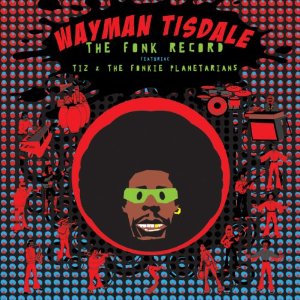 WAYMAN TISDALE lost a battle with cancer in 2009. When he died he was in his mid forties but in that relatively short life he’d packed in more than most could ever hope to achieve.

A native of Tulsa, Oklahoma, at school he became an acclaimed basketball star. Graduating to the University of Oklahoma, he represented his country at the sport whilst still a freshman… going on to win an Olympic Gold in 1984. In ’85 he turned pro and enjoyed a successful basketball career with the Indiana Pacers, the Sacramento Kings and the Phoenix Suns.

Even while playing NBA basketball, TISDALE continued playing his bass guitar – a skill he’d developed in order to offer music during his preacher father’s Sunday services back in Tulsa. Then as his basketball career was drawing an end, he released his debut jazz album, featuring his talent as a bassist. He went on to release a further 8 albums – four of which hit #1 on the jazz chart.

In 2007 WAYMAN TISDALE was diagnosed with bone cancer and despite debilitating treatment and the amputation of part of his right leg, the man remained positive and optimistic – establishing the WAYMAN TISDALE FOUNDATION to assist those in need of prosthetic limbs. He died on May 15, 2009 at the age of 44 and since then tributes of all kinds have made to his courage, fortitude and decency.

Earlier this year the US TV networks screened a biography of WAYMAN. ‘THE WAYMAN TISDALE STORY’ was a detailed account of his career, told chiefly through his own words… a story of courage in the face of personal adversity. The film has just won a DVD release via Rendezvous Music/Mack Avenue. The DVD is part of a two pack set that combines the movie with a 13 track CD which features the best of the bassist’s work. Included is ‘Crying’ For Me’ – a TISDALE tribute written and performed by TOBY KEITH along with the previously unreleased ‘Slam Dunk’.

The theme of both of the DVD and the CD is summed up in WAYMAN’S own words – “You can never give-up because quitting is not an option. No matter how dark it is or how weak you get, until you take the last breath, you must fight”.

‘The Wayman Tisdale Story’ is available now on Rendezvous Records