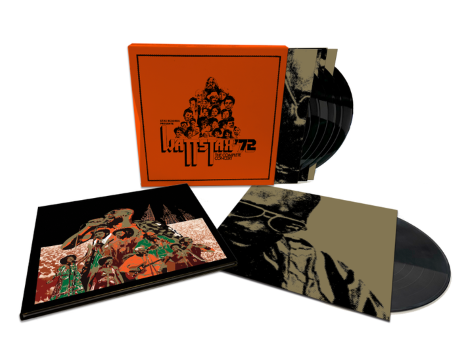 This year marks the 50th anniversary of the legendary WATTSTAX FESTIVAL. The event took place at the Los Angeles Memorial Coliseum on August 20th, 1972, and featured  performances from almost all the stars on the Stax roster including Isaac Hayes, The Staple Singers, Rufus Thomas, Johnnie Taylor, Carla Thomas, The Bar-Kays, Kim Weston, Albert King and Eddie Floyd. There were also quite a few surprise guests!

To commemorate the anniversary, Stax in conjunction with Craft Recordings will be releasing a plethora of music, including plenty of previously unissued material. Amongst the releases will be two-LP reissues of the original soundtrack albums ‘Wattstax: The Living Word’ and ‘The Living Word: Wattstax 2’. Then, to follow, ‘The Best of Wattstax’, ‘Wattstax: The Complete Concert’, plus the super deluxe ‘’Soul’d Out:’ ‘The Complete Wattstax Collection’will all be released on February 24th but is now available for pre-order.  These releases are the first complete audio collections of what Wattstax creator and then-President of Stax Records, Al Bell calls the “most jubilant celebration of African American music, culture, and values in American history.”