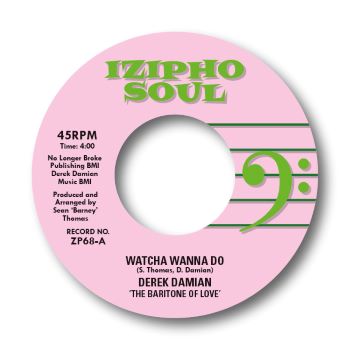 Soul connoisseurs will know a little something about Dallas-based singer, DEREK DAMIAN. A powerful, old school vocalist, he’s affectionately known as ‘The Baritone of Love’, and rightly so. Maybe he inherited his wonderful vocal style from his dad – Harry Elston of the Friends of Distinction!

Probably his best known outing was the now in-demand ‘Watcha Wanna Do’ which was released in 2011. Original copies fetch big  bucks and in 2019 the UK’s Izipho Records licensed it and reissued it. Demand was such that that record sold out in  just  48 hours and copies of that reissue are going for three figure sums!

Step in Izipho again. The label bosses have decided to re-reissue it, if you see what we mean! This time around the disc features a new B side – ‘In My Life’. Derek cut this one in 2013 and it sort of slipped under the radar. It’s another modern soul gem and though officially a B side, it merits A side status. The official A side, though, is the classic ‘Watcha Wanna Do’. It still sounds so, so good – a rolling, effortless soul groove with an irresistible beat and a convincing old school soul vocal. No wonder DD’s ‘The Baritone of Love’!

DEREK DAMIAN; ‘Watcha Wanna Do’/ ‘In My Life’ is out now on Izipho Records. It comes in either ‘Coke Bottle Green’ vinyl at £13 or black vinyl at £12 per copy. Find out more @ www.iziphosoul.com