WANT TO BE IN LOVE? 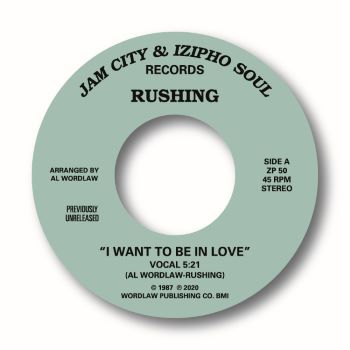 Listeners to the better internet soul stations over the last month or so should be familiar with a wonderful old school tune, ‘I Want To Be In Love’ from an artist simply known as RUSHING.

Our soul detectives discovered why the lovely cut sounds “old school”. It is! It was recorded way back in 1987! We also learned that Rushing hails from Chicago and that’s where the song was recorded. It’s such a great track with a stunning vocal and such stylish but uncluttered, on point production that it’s hard to believe that ‘I Want To Be In Love’ was never officially released!

Well, the good news is that it will be available legally and officially via a Jam City collaboration with IZIPHO RECORDS from October 9th on lovely 7” vinyl. You’ll miss it your peril!

More good news? Well, the B side is almost as good. It’s a tad faster, a little more electro and it’s called ‘Tell Your Boyfriend’. As with ‘I Want To Be In Love’ the big, big attraction is Mr Rushing’s wonderful voice… Teddy P, Ali Woodson, David Ruffin, Marvin Junior… hear shades of all those great soul men in Rushing’s vocals.

RUSHING: I WANT TO BE IN LOVE / TELL YOUR BOYFRIEND; released October 9th on IZIPHO RECORDS