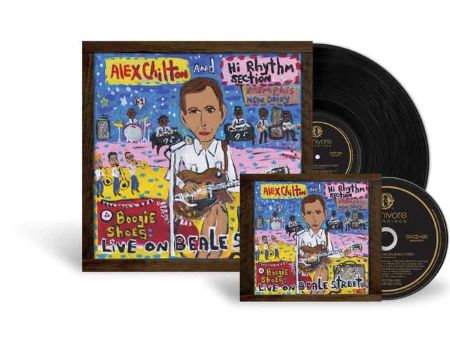 Memphis born ALEX CHILTON is often referred to a cult music icon. I guess that’s because he never quite made it to music’s premier league but his legacy (he died in 2010) is revered by serious music collectors who treasure what he achieved with the Box Tops, Big Star, as a solo performer and on various other projects.

One such project occurred back in 1999. In that year Memphis muso Fred Ford who ran the famous Beale Street Music Festival, was diagnosed with cancer and friends organized what was to become known as “Fredstock” to raise money for his medical bills. The organizers invited Alex Chilton to take part. Back then he was living in New Orleans; he agreed, but said he didn’t have a band, so the Memphis crowd put one together for him… essentially it was the Hi Rhythm section… “Teenie” Hodges (guitar), “Hubie” Mitchell and Charles Hodges (keys) and Leroy Hodges (bass). The brass section consisted of Jim Spake, Ronald Smothers and Scott Thompson. Not a bad line up! Between them, that band had played on countless hit for people like Al Green, O V Wright, Ann Peebles, Otis Clay ands many more.

The concert took place on October 7th, 1999 at Memphis’ New Daisy Theatre and was captured on tape but till now it’s never been released. Omnivore Records are currently gearing up to issue the album on May 7th and when it’s out you’ll be able to hear this unique line up’s versions of a wealth of soul and R&R standards including ‘Where Did Our Love Go’, ‘Hello Josephine’, Maybelline’, ‘6345-789’, ‘Lucille’ and ‘Kansas city’. The album’s to be called ‘Boogie Shoes: Live On Beale Street’ – named for the old KC and the Sunshine Band song that kicks things off.

The wonderful cover (above) has been created by rock ’n’ roll and folk-art painter Lamar Sorrento and a special limited edition copy of the LP comes with a numbered print of the painting. Liner notes come courtesy of one of Chilton’s best friends, David Less who writes: “I never saw [Alex] have so much fun on stage. Without rehearsal, Alex called songs and the band locked in. The horn section consists of top Memphis session guys who huddled together when each song was called creating parts on the fly. The pure joy of playing this music so freely with such legendary musicians comes across in every groove of the record. Get ready to discover this performance by Memphis icons — tearing it up on stage, making music, and having fun. You’ll want to put on your Boogie Shoes.”