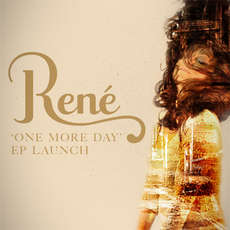 RENÉ are a soul/funk band hailing from Frank Sidebottom territory… that’s right deepest, darkest Timperley, home of the famed Long Shorts! The Cheshire band have a longish history which starts in the 90s when Joe and Emma Rostaing became smitten by the whole Acid Jazz scene and recorded some songs on a primitive four-track sequencer. Time passed and the siblings eventually teamed up with four  other eager funkateers (Sally Wyatt, David Trott, Jon Hargreaves and Karl Hand) and René was born (named after the Rostaing’s grand father who encouraged their musical ambitions).

Over the last five years the band has played throughout Britain and, no surprise, they’re particularly popular on their home turf – Manchester.

René are currently peddling a three track EP which showcases their special brand of northern (right, not “Northern”) soul and funk. Standout is the mini album’s title track, the pop flavoured ‘One More Day’. It boasts a catchy hook and there’s a hint of Swing Out Sister about Emma Rostaing’s cool vocal. ‘Socioerosion’ is a whole lot heavier and serious while ‘What’s It To Me’ has touch of Caribbean swagger about it. If you’re into the organic soul sound of bands like The Bamboos, Speedometer and The New Mastersounds you could do worse than check out René. Do so at @ www.reneband.co.uk. There you can find out how to access their music and where to catch them live.