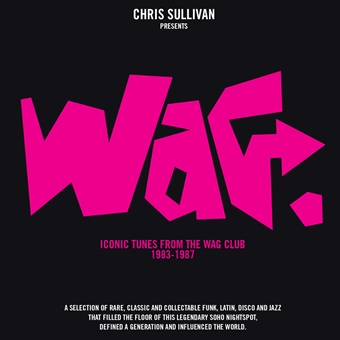 Nowadays the word “Wag” has an unusual connotation … something to do with overpaid footballers’ wives … but back in the 80s for those in the know “Wag” meant just one thing…. London’s hippest club. Situated in Soho’s Wardour Street, the club had a no-photo policy and strict selective entry, and because of this discretion it drew celebs and stars who mingled unhindered with the fashionable, Face-reading and hip Mr and Mrs Joe Public who came to enjoy the esoteric music and heady atmosphere.

The Wag opened in October 1982 and the first DJs were Northern Soul veterans Paul Guntrip and Hector Heathcote who provided the huge range of music ….. Soul, Latin, jazz, dub, Afro and funk. Over the years the music evolved but the Wag’s playlists were always known for quality and class.

Enjoy those playlists all over again as Harmless Records release ‘Chris Sullivan presents The Wag’ – a 4CD, 53 track box set – on June 10th. (Chris Sullivan is a musician, journalist and most importantly, in this context, the Wag’s founder, director, promoter, designer and booker for its entire run of 18 years.)

Soul, jazz and funk collectors will know, love and probably own many of the included tunes, but to whet your appetite the set features stuff like MFSB’s version of ‘Freddie’s Dead’. ‘John Handy’s ‘Hard Work’, Aaron Neville’s ‘Hercules’, Doors Duke’s ‘Woman of the Ghetto’ and Brother To Brother’s take of ‘In the Bottle’.