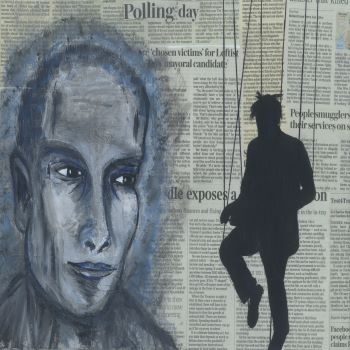 Back in 1999 ANDY MITCHELL disbanded his AM Band and formed a new ensemble, ANDY & THE OTHE ONE. The band’s first fruit was the 2000 album ‘Songs from the Bottom Drawer’. The album, though not a proper “covers” collection, was a set of Andy’s old songs reimagined with the odd newie. More albums followed but critics and fans always had a soft spot for the ‘Bottom Drawer’ collection and one of the key cuts was the persuasive ‘Polling Day’ – a beguiling mix of jazz, modern soul, electro funk and clips of Martin Luther King’s speeches.

The celebrate the 20th anniversary of the album’s release Andy has just reissued ‘Polling Day’ and despite the fact that it’s two decades old, it still sounds fresh and innovative… intriguing and provocative too.

The B side is a brand-new recording of ‘Waiting For A Break in the Weather’ – a lazy, soulful, building meander whose gentle touches are a perfect foil to the edge of ‘Polling Day’.

The single is out now. And the band’s name? Andy explains that when playing the first gigs with his musical partner Austen Hornbrook, when Hornbrook was asked who he was, he’d always reply “I’m the other one”!  There you go!