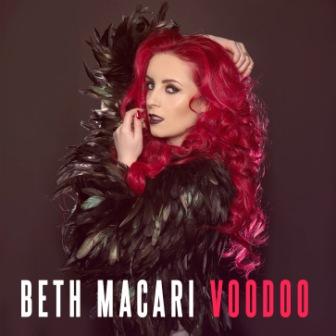 Lots of top soul tastemakers have been mightily impressed by the new album from Newcastle’s Nick Pride and the Pimptones (see our reviews archive). Many of those tastemakers also commented on the powerful vocals of the band’s lead singer BETH MACARI.

Ms Mac, like most of the Pimptones, is a true Geordie… Newcastle born and bred … and maybe that explains her feisty approach to the soul and funk music that’s her passion and simultaneously with her Pimptones’ work, Beth is forging a successful solo career.

Her first solo single ‘Heartstrings’ made it to number 18 in the ITunes singer-songwriter chart and was playlisted across the BBC. So impressed was TV director Nigel Wright that he choose Beth to front the house band of Sky One’s music & comedy TV game show ‘Bring The Noise’.

Beth has also toured Europe, performing at many top music venues and already lined up this summer are gigs with at Newcastle’s ‘Riverside’, a performance at the ‘Lindisfarne Festival’ and shows at the award winning Surf Café.

To top all that Beth will be releasing a new single on May 28th. The tune is a churning, urgent ‘Voodoo’ that’s driven along on some funky guitar riffs. But it’s that tough, soul-fuelled voice that carries the day… hints of Janis Joplin with a touch of (a young) Tina Turner. The usual download portals will allow you to investigate.