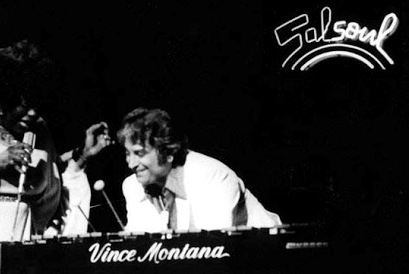 Born in February 1928, MONTANA, like many Philadelphia musicians, was of Italian extraction. His musical career began in his late teens when he played in local South Philly dance bands, graduating to supporting visiting stars like Sarah Vaughan and Charlie Parker. After a spell playing in the hotel bands of Las Vegas he returned to his native Philadelphia working as a session-player in the city’s hottest recording studios.

When the City Of Brotherly Love’s soul boom exploded VINCE was first choice percussionist and vibraphonist for all the hottest producers and labels – most notably, of course, KENNY GAMBLE and LEON HUFF. MONTANA worked on many of Philadelphia’s biggest hit records – including tracks on THE DELFONICS, THE SPINNERS, THE O’JAYS, EDDIE KENDRICKS, LOU RAWLS, THE JACKSONS and HAROLD MELVIN and THE BLUE NOTES. An integral part of MFSB (the Philadelphia International house band), MONTANA was also a key member of THE SALSOUL ORCHESTRA – a big band that worked out of New York and Philadelphia, fusing disco flavours with Latin rhythms.

In the early 80s MONTANA founded his own label – Philly Sound Works – and many of the tunes issued by the label (notably ‘Heavy Vibes’ and ‘The African Track’) are now sought after collectors’ items. His underground success with Philly Sound Works led young soulful house mixers, producers and musicians to seek him out for assistance and to beef up their recordings, with MONTANA featuring on club cuts from the likes of MASTERS AT WORK, DAVID MORALES and even THE PET SHOP BOYS. He continued to work with soul stars too – notably GEORGE BENSON, INCOGNITO and ROY AYERS.

No other details are available – other than VINCE MONTANA died on Saturday 13th April 2013.