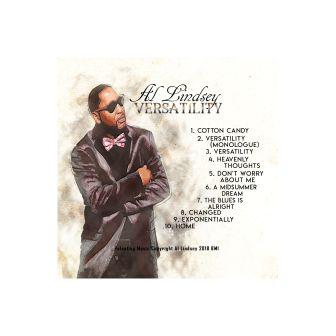 AL LINDSEY is a veteran US soul man who, though born down in Virginia, actually began his singing career in Detroit where his family relocated to. By 14 he was singing lead in his local church choir and by 16 he was hitting the Motor City’s night clubs.

He eventually hooked up with Lawrence Payton Jr (son of Four Tops, Lawrence Payton Snr and now a Top himself) before deciding to take the solo route. One of Al’s first recordings ‘Always On My Mind’ became a cult Northern soul classic while a trio of albums gained a measure of success.

Al has just self-released his fourth long player – the ten tracker that is ‘Versatility’, and it’s shaping up to be his most successful to date, being, well, “versatile”. There’s plenty for the dancers, different shadings of soul, heartfelt ballads and even a dash of reggae.

The cut garnering all the plaudits right now is the opening track ‘Cotton Candy’ – a tight, proper soul groove with a touch of toughness – perfect for the modern soul scene. Repeat plays of the album though allow the ballads to shine. Two of the best are ‘Midsummer Dream’ and ‘Heavenly Thoughts’ while the album’s title cut attracts with its mix of lush orchestration, heartfelt vocals and meaningful, “social awareness” style lyrics. It’s preceded by a monologue that adds a little more magic.

The album’s lush soundscape in some ways reminds me of vintage Whispers sets, though elsewhere I can hear shades of Isaac Hayes. In truth Al’s vocals go a little awry in places but in fact that only adds to the authentic, old school sound… certainly charming.

Al Lindsey’s ‘Versatility’ is out now