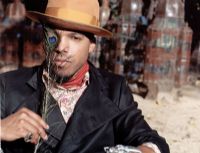 There have been some strange goings-on at Blue Note recently. On Friday 8th December VAN HUNT’S P.R. people issued a terse statement to the unsuspecting British music press in relation to the Ohio musician’s forthcoming album. It read: ‘I am sorry to inform you that Van Hunt’s new album Popular originally scheduled for release on Blue Note Records in April 2008 will now be released on a different label at a later date.’ It appears that Hunt’s contract with Blue Note-EMI has been terminated – whether he jumped or was pushed is open to conjecture, though it looks like he’s been allowed to take his master tapes with him in order to find a new recording contract.