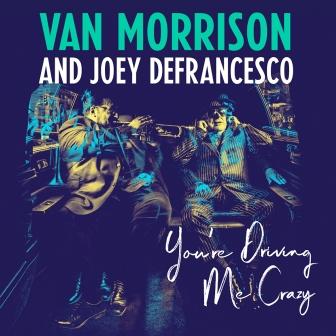 Seems like VAN MORRISON is making a real effort to enter the Guinness Book Of Records as the most prolific recording artist of recent years as he reveals that at the end of April he’ll be releasing another brand new album – his third in less than seven months!

Sir Van’s newie, ‘You’re Driving Me Crazy’ comes hot on the heels of last year’s ‘Roll With The Punches’ and the newer ‘Versatile’. Like both those albums the new collection is a mix of re-readings of Morrison originals (like ‘All Saints Day’ and ‘Have I Told You lately’) alongside a smattering of covers of blues classics and standards from the Great American Songbook (stuff like ‘Sticks And Stones’ and ‘Miss Otis Regrets’).

However, unlike the last two albums, the new album is billed as double header…. a collaboration with jazz organist Joey DeFrancesco. The Hammond maestro has worked with people like Miles Davis, John McLaughlin and Grover Washington and it’s his band that plays throughout the recording.

A 7″ vinyl single from the album –  Van’s own ‘Close Enough For Jazz’ b/w a rendition of Guitar Slim’s ‘The Things I Used To Do’ will be available for Record Store Day 2018 (celebrated at independent record stores nationwide on Saturday, April 21).

The announcement of the new album coincides with the Celtic troubadour’s announcement of his divorce from Michelle Rocca. (the couple are pictured below) After protracted proceedings the couple were granted a divorce by a Dublin court. Morrison tweeted; : “At my age, I have found it to be a hugely wearying, protracted experience and I’m relieved that it has finally reached a conclusion.”