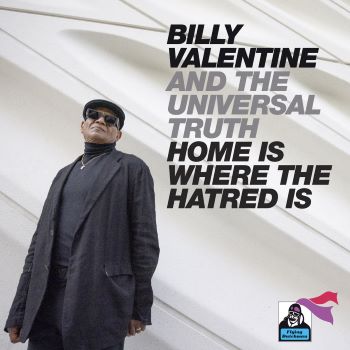 Serious soul buffs will know about powerful vocalist BILLY VALENTINE and iconic label FLYING DUTCHMAN. To jog memories, Valentine was a key part of the Valentine Brothers who in 1982 enjoyed a hit with the original version of ‘Money’s Too Tight To Mention’. That song, of course, went on to become a massive hit for Simply Red (sadly, another soul tune that in the mainstream is best known in the cover version!) Since then Billy has carved himself a successful solo career and is known for  voicing the main theme to the hit TV show ‘Boston Legal’ and featuring  in the movie ‘The Five Heartbeats’. His 2017 album ‘Brit Eyed Soul’ was critically acclaimed –  a clever album that featured his takes on Brit sourced hits, turning the  tables as it were on Simply Red. Flying Dutchman Records (founded by Bob Thiele) has an even more intriguing and impressive lifeline. The iconic label released music on legends like Duke Ellington, Gil-Scott Heron, and Leon Thomas as well as recorded speeches by Black intellectuals like Angela Davis and Stanley Crouch. In abeyance for many years, it’s now being revitalised by Bob Thiele Jr and for the resurrected label’s first release the new boss has turned  to Billy Valentine to create something really special.

For some time the duo have been working on an album whose aim is to offer songs of significance and provocation… songs  that reflect the social, racial, political  and economic turmoil that we all currently  struggle with. That album, ‘Billy Valentine and the Universal Truth’  is set for release via Flying Dutchman/Acid Jazz on March 17th .

We’ve already been treated  to the LP’s first single – a sensitive reading of dear Curtis Mayfield’s ‘We The People Who Are Darker Than Blue’ and the set’s second 45 has just won release. It’s an equally disturbing track – a cover pf Gil-Scott Heron’s harrowing ‘Home Is Where The Hatred Is’- the classic depiction of a  junkie’s lament. Neither tracks are an easy listen; they’re not meant to be nor are the album’s other offerings which include Prince’s ‘Sign  Of The Times’, War’s ‘The World Is A Ghetto’ and original Flying Dutchman label star, Leon Thomas’ ‘The Creator Has A Master Plan’.