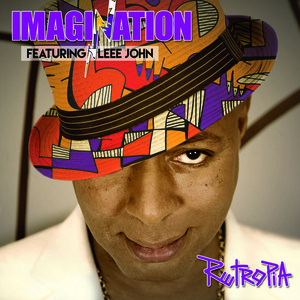 Remember Imagination? Sure you do… right, they were probably more camp-pop than soul but main man LEEE JOHN had a mean soul falsetto. And if you’re a fan you’ll be delighted to know that Leee is all set to release a brand new long player in June.

Maybe confusingly, it’s titled ‘Retropia – Imagination featuring Leee John’ and our man says the album will be his “penultimate” recording! Mr John says that he had so much fun recording the 12 tracker that he knew that he’d have one more go after it. So with a follow up already planned and nothing after that (he says) , Leee can safely assert that this indeed is his penultimate effort.

… and what does it sounds like? Well, it’s as if time has stood still. The sound of ‘Retropia’ is chiefly the sound of classic Imagination and there’s no escaping Leee’s totally distinctive voice. Best cut to these old soul tuned ears is a quite lovely mid-tempo groove called ‘The Best I Could’…. and after that if you still doubt that Leee doesn’t cut the soul cake grab a listen to his cover of the Temptations’ ‘Tell Her Love Has Felt The Need’ – here he gives the Tempts a real run for their money! And with input from people like Loose Ends’ Steve Nichols and Bluey Maunick, ‘Retropia’ might well surprise a few people… though I’ll pass on Leee’s version of AC/DC’s ‘Highway To Hell’.

The album also offers a final, “hidden” track mash up. Not that well hidden actually – versions of Stevie’s ‘Visions’, ‘Police and Thieves’ and ‘Just An Illusion’.