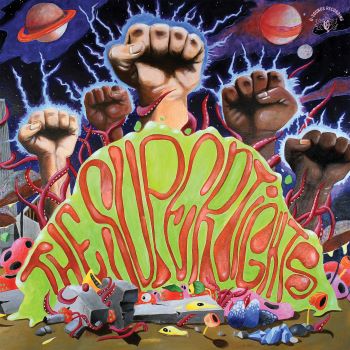 THE SUPERTIGHTS are a French band whose aim is to deliver “beats and grooves and their take on Spiritual Jazz”. The core of the group make up the studio band of Qsounds Records and that’s the labels for the Supertights’ upcoming, analogue-taped, second album.

The 8 tracker is mainly instrumental – the only vocal is a wild and unbridled cover of the Art Ensemble Of Chicago’s ‘Yoyo’s Theme’ with vocals from Rachel Yarabou. And that choice of cover should tell you where this band is coming from. The music on the set is loose, funky and  jazzy with the occasional Blaxploitation garnish as on ‘Dead Cops Lullaby’ and the ‘Superfly’ flavoured ‘Come Back Home Little Boys’. Again those titles should tell you plenty about the band’s music!

Their PR people says that the Supertights “trace a singular furrow in the rich and varied universe of contemporary instrumental music”. Don’t know too much about that but I can say that if you dig the sounds of bands like Sure Fire Soul and the Budos Band, you may want to investigate here! It’s released via Qsounds on May 13th!