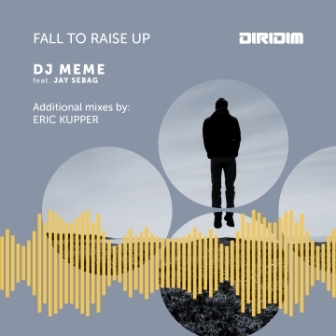 Brazil has always been a hot bed of dance music and one of Brazil’s current hottest dance music exponents is DJ MEME. He’s been in the business since the 80s, creating mega mixes for the likes of The Bee Gees, New Order and The Pet Shop Boys, among others. He has since remixed and produced many music stars from Shakira, Mariah Carey, Toni Braxton, Dido, Ricky Martin, Des’ree and Frankie Knuckles. En route he’s picked up 23 Gold Records, 15 Platinum and 3 Diamond records and all kinds of other many awards.

For his own latest outing, he’s teamed up with David Morales’ new DIRIDIM label and created an insistent, thumping electro groove, ‘Fall To Raise Up’. Vocalist on the cut is Jay Sebag –best known for his Martin Soveig produced ‘Rocking Music’. .. not sure if it’s him whistling though!

‘Fall To Raise Up’ also comes in an Eric Kupper mix and big E cranks up the thumping beats in his own very special way. There also radio edits of both tweaks and they’re all good to go right now!