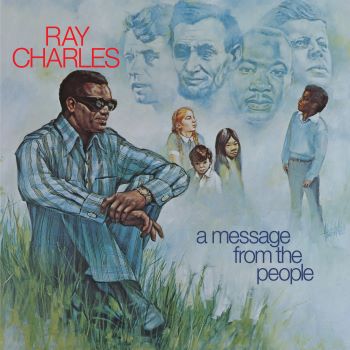 Most soul and jazz fans will know that in 1962 RAY CHARLES set up his own record label, TANGERINE. He joined the label himself in 1966 and it survived till 1973 and despite its status, reissues are few and far between… case in point, why don’t they reissue Louis Jordan’s wonderful rendition of the Goffin-King song ‘Point Of No Return’?

So, it’s good to report that Tangerine are reissuing a couple of in-demand album from Ray Charles himself… both originally released and/or recorded in 1972 – so, clearly, the reissues are with us to celebrate their 50th birthday!

First up there’s ‘A Message from the People’. This 10 tracker is generally acknowledged as Uncle Ray’s most socially conscious album confronting issues like poverty and injustice and proffering messages of peace and hope . Tracks include a cover of Stevie Wonder’s ‘Heaven Help Us All’, ‘There’ll Be No Peace Without All Men As One’ and a lovely, heartfelt version of ‘Abraham, Martin and John’ (the song referenced in the cover artwork, above). This in-demand album will be available on vinyl from 17th June as well as on CD, digitally and via all the usual streaming services.

The second Tangerine release is different altogether – ‘Ray Charles Live In Stockholm 1972.’ This  one has never been released before and the tapes were only recently discovered! So, a real treat for Ray Charles’ collectors. The repertoire is varied and includes some of his best known and defining songs, including incendiary versions of ‘I Got A Woman’ (eight and a half minutes long!) and ‘What’d I Say.’ There’s a lovely pared down version of ‘I Can’t Stop Loving You’ too ,which minus the sweet strings of the original studio version, takes on a whole new meaning. ‘Ray Charles Live In Stockholm 1972’ is already out on vinyl and, of course, digitally and via streaming portals.