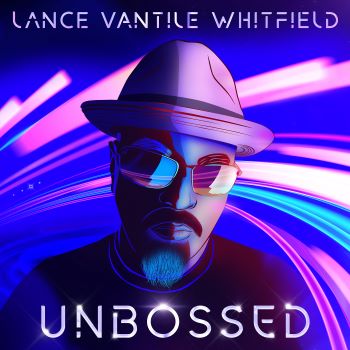 ‘Unbossed’ is the rather unusual title of a new album from US bass player LANCE VANTILE WHITFIELD. Lance hails from a theatrical family and started the bass aged just 12 taking  the late Louis Johnson as his role model. At school he played in various garage bands including one that numbered future Red Hot Chilli Pepper, Hillel Slovak in its ranks. After school Lance joined Bobby Womack’s nephews in the funk groups, Spoiled Brat and Rhythmic Thrust before going on to work with people like Will Wheaton and Charlie Wilson and the Gap Band.

Now, with ‘Unbossed’, Mr W is out there as a solo artist and for a bass player’s album, the 10 tracker is remarkably varied. Co-written and co-produced with his old school pal, DeYon Dobson, Lance does turn in some quality bass-led instrumentals like the album’s title track (enlivened towards the end with some spoken word!) and ‘Fired Up’ – an apt title  for a tune that does fire up as it progresses. But there’s more here than straight, bass-led instrumentals.

For starters, the best vocal cut is the crisp and bright ‘Hold On’. With  vocals from the ever-dependable Tim “Tio”  Owens, the modern soul dancers will find their feet moving to this! Amongst the other featured vocalists on the album is a previous  collaborator of the bassist, Sue Ann Carwell. She fronts (briefly) the gentle but bass-heavy, ‘Only Give It Up To Me’ and ‘All I Wanna Do’ . For variety, ‘Unbothered’ builds on a jazzy vibe; the opener, ‘Action’ is lazy and laid back  with a spoken lyric from (I’m assuming) Lance; while on the funky ‘Help Me (I Can’t Breathe)’, the reference is obvious.

To recap, for an album led by a bassist, ‘Unbossed’ offers real variety. There’s no bass man self-indulgence here  -maybe that’s  the point of the title. The cover and artwork by the way, are Lance’s own work. He’s a celebrated graphic designer (as well as top bass player) with many top commissions under his belt!