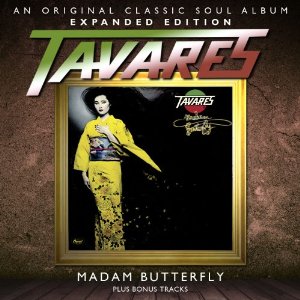 The soulmusic.com label continues with its programme of reissuing TAVARES’ Capitol back catalogue by releasing the New Bedford brothers’ seventh and ninth LPs for the major. ‘Madam Butterfly’ was originally released in 1979 when the boys were riding high on the back of a string of pop/soul/disco flavoured hits like ‘Heaven Must Be Missing An Angel’ and ‘More Than A Woman’. So, for the ‘Madam Butterfly’ project TAVARES and their management decided to go back to their soul roots. Consequently legendary Philadelphia producer/arranger BOBBY MARTIN was brought in to oversee matters. MARTIN, now working out of LA, rounded up some great songs (including a trio from SAM DEES), assembled a team of top notch sessioneers (amongst them old Philly colleague RON KERSEY) and set to work. The result was a soul vocal group tour de force. The album’s lead single, ‘Never Had A Love Like This Before’ is exceptional and, indeed, the song remains a mainstay of the brothers’ stage show. The three DEES’ ballads (‘Games, Games’, ‘Let Me Heal The Bruises ‘ and ‘My Love Calls’) and the first version of ‘I’m Back For More’ have also stood the test of time. Despite the set’s excellence, ‘Madam Butterfly’ only hit #13 on the R&B chart and stalled at #92 on the pop listings, so a disappointed Capitol brought in new producers for the next TAVARES album.