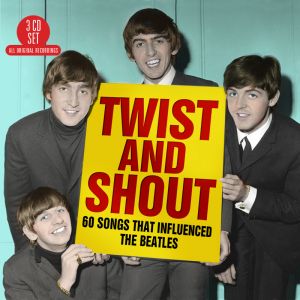 There are any number of compilations out there bringing together songs that influenced and/or were covered by the BEATLES in their early days.

Proper Records have just released a “fab”, 3 CD, 60 track collection that is possibly the most comprehensive. It features music that the we know the young John, Paul, George, Ringo and Pete (Best) cherished and stuff that they covered in their own inimitable way – on stage, in live recordings at the BBC and, of course, on their early long players.

There’s plenty of rock n roll from people like Elvis, Larry Williams, Little Richard and Buddy Holly; a whiff of rockabilly from Carl Perkins and Johnny Burnette and stacks of early soul – including Barrett Strong’s ‘Money’, The Cookies’ ‘Chains’, Arthur Alexander’s ‘Anna’, the Miracles’ ‘You Really Got A Hold On Me’ and the Isley Brother’s ‘Twist And Shout’ for which the collection is named. Lots more as well – all conspiring to shape a band that helped shape the culture of the second half of the 20th century

Beatles collectors will point at a few omissions – maybe room could have been found for the Donays’ ‘Devil In His/Her heart’ or the Shirelles’ ‘Boys’ but what is here paints a wonderful sonic portrait of an crucial time in the evolution of popular music.