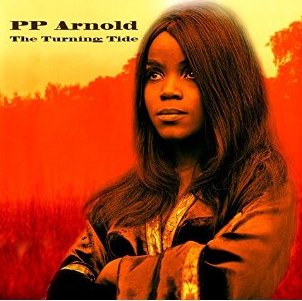 2017 sees soul diva PP ARNOLD celebrate her 50th anniversary in the music biz! Arriving in England in the mid 60s as an Ikette, she was quickly signed as a solo star to Immediate Records and scored with ‘First Cut Is The Deepest’ and ‘Angel Of The Morning’. Sadly Immediate Records was more about creativity than business plans and the label (the brain child of Rolling Stones’ manager, Andrew Loog Oldham) quickly folded leaving Ms A in a musical limbo.

Then a chance meeting with Bee Gee, Barry Gibb helped secure PP a deal with the RSO label and Barry and Pat (PP) went into the studios to work on an album. The pair cut eight songs together before Bee Gee work pressures took Gibb away. RSO then brought in Eric Clapton to finish the long player but again luck wasn’t with Ms Arnold.

Music biz politics meant that the album was never actually released and over the years it has achieved an almost mythical status on the UK soul collectors’ circuit. Now, at last, the set – ‘The Turning Tide’ – is to be made available.

However, the collectors will need to wait till October – but the wait will be worth it. The 13 tracker includes songs by Van Morrison, Steve Winwood and, of course, Barry Gibb as well as blistering covers of ‘You’ve Made Me So Very Happy’ and ‘Spinning Wheel’. Featured musicians include Eric Clapton while featured backing singers number Rita Coolidge and Doris Troy.

THE TURNING TIDE will be released on October 6th on Kundalini Music.