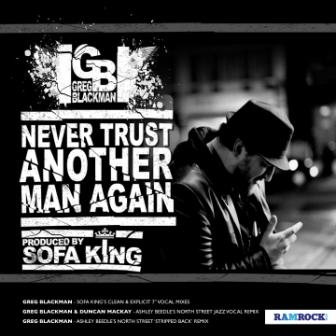 UK soul connoisseurs have known about GREG BLACKMAN since his work with Mr Bird (DJ Steve Bird). On Bird’s 2014 long player ‘Lo Fi Classics’, Greg fronted ‘Over Again’ and ‘Where Did The Party Go?’ Both tunes in original and remix formats scaled all the credible UK soul charts, leaving soul collectors wanting more from Greg.

The good news is that Mr Blackman’s been back in the studio and, working with Ramrock Records, he’s all set to unleash a new single….. a moody, soul-fuelled ‘Never Trust Another Man Again’. It’s a heavy song… an expressive, melancholic social commentary. Greg is serious about what he does: “The original role of soul music as ballsy big bold protest music of protest that spoke out against oppression is what I’m about. Being a white man singing political music of black origin and how to juggle those seemingly opposing elements is what I’m aiming for.” Greg opined to us.

The original tune will be available early September on Ramrock Blue 7″ vinyl. The equally moving Ashley Beedle haunting jazz North Street Remix featuring Duncan Mackay on trumpet and the Stripped Back Remix will only be available as part of the digital EP.