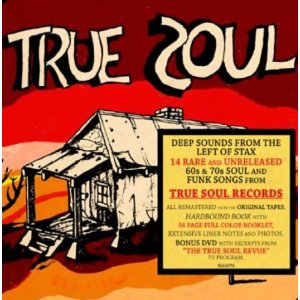 It was one of soul’s best kept secrets…. few soul people knew too much about it, but now thanks to the efforts of inveterate crate-digger EOTHEN ALAPATT, the whole soul world can enjoy the authentic southern soul of TRUE SOUL RECORDS.

The little-known label was based in Little Rock, Arkansas and was the brain child of LEE ANTHONY. LEE opened a record store in Little Rock in 1966 and the store – Soul Brother Records – became a magnet for local musicians. In ’68, therefore, he built a studio and launched his own label – which he called, with unnerving accuracy, True Soul. True Soul had an eclectic (some might say, chaotic) recording policy – almost anyone could walk in off the street and make a record… provided they had a good song. The records were issued in small quantities and few had any impact beyond the immediate Little Rock area, though ‘Funky Music’ from THOMAS EAST sold over 200,000 copies after being licensed to MGM.

None of the True Soul artists were stars, though members of THE CONSPIRACY went onto become the rhythm section of the GAP BAND, but that didn’t seem to matter. They all performed with enthusiasm and commitment and LEE ANTHONY was happy to provide them with an outlet for their talents. Then, in the 80s –as rap became the youthful choice – he disbanded the label; he then closed the store in 1998 after being shot by intruders.

The following year, Nashville student and collector, ALAPATT tracked him down and since then has been working on getting the True Soul catalogue released on CD. At last his plans have come to fruition. Now Again Records are about to release two volumes of True Soul material – so everyone can at last enjoy the authentic rustic, soul of Arkansas. Each volume offers an overview of the label and comes in a special book style pack with extensive notes from ALAPATT and ANTHONY. As a bonus each pack also has a DVD of True Soul artists performing. Clearly both sets are unmissable for all soul collectors – especially those with a penchant for the rough, real sounds of the South. Release date is August 1st and expect full reviews in SJF very soon.