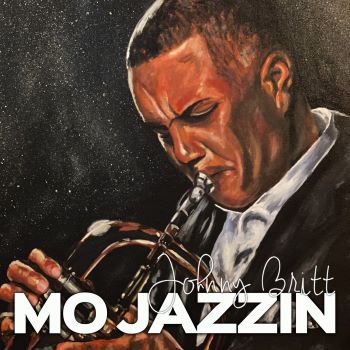 Listeners to the savvy soul stations and students of the soul charts will recently have come across a sinuous and, yes, sexy tune from trumpeter/vocalist JOHNNY BRITT, ‘Let’s Get Down Tonight’. The European soul fraternity first got to know Mr B’s music  back  in 2016 via his wonderful ‘Marvin Meets Miles’ album on which the Louisville-born singer, songwriter, producer, trumpeter, arranger and composer fused the essence of both those music maestros to create his own intriguing soundscape.

On ‘Let’s Get Down Tonight’ you can hear again how Johnny  somehow manages to encapsulate the flavours of Gaye and Davis … multi-layered, soulful vocals and haunting horn work – into his own subtle masterpiece. The cut is one of many highlights on Johnny’s current album, ‘Mo’ Jazzin’’ which he’s been busy promoting despite the pandemic. The L.P. also offers a “Jazz Mix” of Let’s Get Down Tonight’ while the lovely ‘Love’s Callin’’ proffers more reminders of the genius of Marvin Gaye via layered harmonies, a labyrinthine groove and sensitive vocals. Amongst the other key cuts on the album is ‘Keep Workin’ It Out’ a clever, quirky modern soul groove with vocals from the dependable Eric Roberson. The song celebrates Johnny’s 34 years of wedded bliss  with his wife Arlene.  Eric Roberson is one of many guests on the 14 tracker. The album also features input from Norman Brown, Paul Jackson, Jr. and Marion Meadows. Guitarist Brown’s input on the album’s title track is particularly memorable.

As we’ve stated Johnny’s busy promoting the album, but he still finds time to front his own ‘The Turntable’ radio show. It’s aired twice a week Saturdays 2am – 4am and Mondays Midnight – 2am UK time on Solar Radio. You can go to www.mixcloud.com to listen to all 33 Episodes. His guests have been George Benson, Howard Hewitt, Peabo Bryson, Otis Williams, Patrice Rushen and many more.