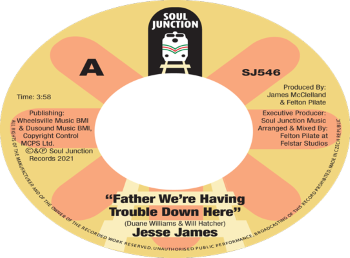 The first release of 2022 from ever consistent SOUL JUNCTION RECORDS is another collaboration between the label and JESSE JAMES. Soul Junction have a long relationship with the Arkansas-born singer. I think it goes back some ten years when SJ released Jesse’s  sedate stepper, ‘I Gave You Love With An A Plus’. Then there was the Soul Junction album ‘Let Me Show You’ which was followed by the lovely 7” ‘(The Girl In) Clinton Park’… quickly snapped up by soul connoisseurs and collectors as too was the follow up, a bright, breezy, optimistic ‘If A Man Ever Loved A Woman (Baby I Love You)’.

The new SJ Jesse James 45 features two mixes of a song called ‘Father We’re Having Trouble Down Here’ – a questioning, soulful meander with meaningful lyrics as relevant now as they were when the song was written back in the day by the famed team of Duane Williams and Willie Hatcher.

Duane Williams has long-standing links with Soul Junction too. The label has issued a single and an album on him and that album, ‘These Songs Are For You’ is the source of James’ ‘Father We’re Having Trouble Down Here’. Williams recorded his album in Detroit with his old mentor Willie Hatcher and the gospel/social commentary song ‘Father We’re Having Trouble’ was always a standout – a hint of blaxploitation and a garnish of ‘Inner City Blues’ …made for intrigue and reflection.

Soul Junction boss, Dave Welding always liked the song and knew its feel and sentiments were perfect for Jesse James (pictured left) to work on – so the duo resolved to record it. Various factors built in delays but now a decade or so on from Duane’s original version a new and equally pertinent take is good to go!

During early 2020 Jesse entered Con Funk Shun multi-instrumentalist and vocalist Felton Pilate’s Felstar Studio in Atlanta to lay down the basic tracks with Felton acting as co-producer on this project. More COVID problems brought more delays with the producer locked down in Atlanta and the singer ensconced on the West Coast. However, as restrictions were eased Jesse and Felton managed to get back together to finish the project which is finally set for release at the back end of February.

As we’ve opined ‘Father We’re Having Trouble’ is intriguing and powerful – the more so as news bulletins and conversation between singer and producer are spliced into the swirling, dramatic mix – a soundscape that matches the message in the music.