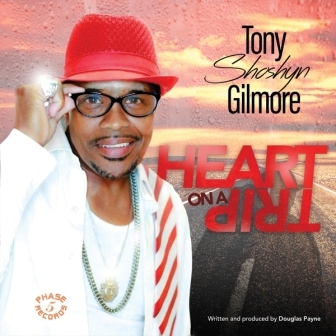 TONY “SHOSHYN” GILMORE is a new name to us but we’re intrigued and more than a little beguiled by his latest single ‘Heart on a Trip’. Tony, it seems, is Philly soul man and avid anoraks and sleeve readers (not us!!!) will know him from his work with Kool and the Gang where he shared lead vocals with “JT “Taylor in the band’s prime. It was with Kool and the Gang that he earned his nickname, “Shoshyn” (pronounced Show Shine) for his dynamic stage presence.

Since the fragmentation of Kool and the Gang, Tony has worked with people like George Benson and Joe but at the back end of last year he found a demo tape that had been recorded by top Philly muso, the late Frank Alstin who had penned hits for people like The Jones Girls and Xscape. On that tape was a rough version of ‘Heart on a Trip’ and Tony knew he had to record it. What he’s produced his classic old school Philly ballad complete with spoken intro… hints of Blue Magic. It’s out now