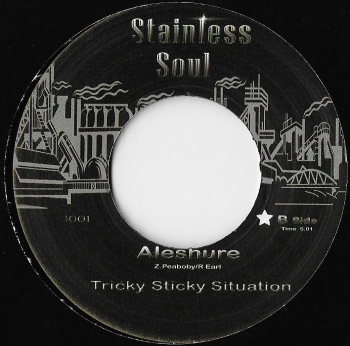 STAINLESS SOUL is a new 7” vinyl  label but the team behind the imprint are far from “new” to the scene. Stainless Soul, you see,  is headed up by UK soul veteran MIKE WARD who hails from Sheffield – hence the label’s name – “stainless”, geddit?

Over the years Mike has unearthed countless soul treasures  and issued plenty of ‘em as singles and on now-collectable compilations. He maintains that quality with his first Stainless Soul release which pairs two great songs from a soulstress by the name of ALESHURE (pronounced Aleesha, we’re told).

We don’t know too much about Ms A. The discography web sites don’t tell us too much save that in 1997 she graced one side of a single with a song called ‘Shower The World. The 45’s other side featured ‘I’m Ready’ from the Mighty Clouds Of Joy. Released on the Phoenix label, copies now fetch upwards of £75!

Likewise we don’t know a lot about the provenance of the  songs on the Stainless Soul single but they’re worth serious investigation. The A side  is a properly soulful ballad, ‘Tricky Sticky Situation’ . It’s a tale of lovers from different social/ethnic(?) backgrounds and Aleshure’s delivery offers plenty of emotion. The chorus is a killer and the cherry on the cake is the spoken word part. We believe that the song was originally recorded by E Jon (aka Elijah Jones , part of the Instant Funk axis).

This single’s B side is a different affair – a classic modern soul dancer, ‘School Me’. Busy and bright, it ticks all the boxes that the modern soul crowd like ticked – including rarity!

Right now, Stainless Soul don’t have a web site but you can learn more by firing off an e-mail to stainlesssoulrecords@hotmail.com