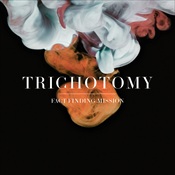 TRICHOTOMY are an Australian jazz trio with two albums to their name – 2010’s ‘Variations’ and ‘The Gentle War’ from 2011. Both were released on Naim Records and the label is now set to release the group’s third long player – ‘Fact Finding Mission’.

Sean Foran (piano), John Parker (percussion) and Patrick Marchisella (bass) are known for their collective intensity and combining dense rhythms with melodic clarity. The new album, is however, brighter than the last two. The trio have been together now for 13 years and, it seems, have a more relaxed approach. At the same time two of the group have become fathers and that’s reflected in the optimistic music –typified by the lively opener ‘Strom’ (Nordic for stream, current or flow). The trio though still revel in abstraction – witness the title tune which features distorted bass and Chinese gongs to achieve its chaotic effect. Elsewhere the music is influenced by both Eastern European folk melodies and children’s songs. The 9 tracker is a challenging listen and you can learn more @ www.naimjazz.com