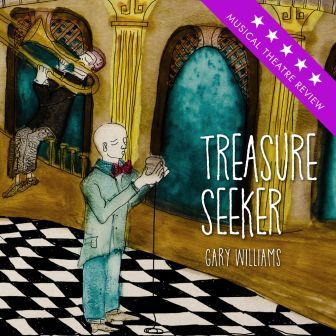 GARY WILLIAMS is a UK based jazz and swing singer with 16 (we think) albums under his belt! His music CV is hugely diverse – ranging from working with the Liverpool Philharmonic Orchestra through to topping the bill at Ronnie Scotts. In between he’s presented shows on BBC Radio 2 and Jazz FM and even written a showbiz book, ‘Cabaret Secrets’. His musical odyssey has taken him all over the world – from Australia to Buckingham Place and to music festivals here there and everywhere. He cites his influences as jazz, soul, folk and pop and critics have compared Gary’s sound as a hybrid of Michael Buble, Donald Fagen and Michael Franks.

Intrigued? Well find out more via Gary’s latest album – a cool and sophisticated 13 tracker, ‘Treasure Seeker’. The new long player marks something of a departure for Mr W. because, for the first time, all the songs on the album have been co-written by Gary. His collaborator for the collection is pianist Jon Nickoll who boasts a pedigree as varied as Gary’s. He’s hung out with the Sex Pistols, jammed with Amy Winehouse, performed for Bill Clinton at the White House and is currently resident piano man at London’s swanky Savoy Hotel’s American Bar.

The third person in the ‘Treasure Seeker’ partnership is arranger Phil Steel and the trio, along with a full band of top session players, have crafted an album that harks back to the golden age of elegant lounge jazz and big band swing, though, throughout there is a contemporary edge – most obvious on the album’s title track. Amongst the best “swingers” is the lush production that is ‘Kiss Me On A Rainy Day’ while the lovely ‘When Sunday Comes’ offers a gorgeous Latin vibe. Gary and the team know it’s a good tune, ‘cos as a closer they offer an alternative look at the song… and the resulting “boogaloo” version is just as satisfying – topped, as it is, with a classy sax solo courtesy of Graeme Blevins.

GARY WILLIAMS; TREASURE SEEKER is out now and you can find out more @ www.garywilliams.co.uk