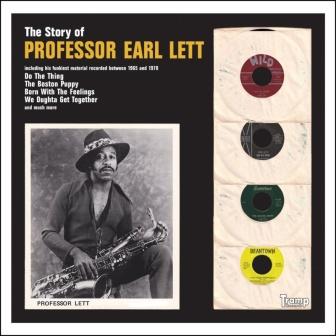 Germany’s TRAMP RECORDS is a great little indie set up that specialises in unearthing little known soul, funk and jazz gems and they must be doing something right ‘cos they’re currently celebrating their tenth anniversary!

Their latest release is a fabulous 18 tracker that tells the story of the relatively unknown sax man/vocalist PROFESSOR EARL LETT. The Prof was born in rural Alabama back in 1945 and after serving time with Uncle Sam he took up music and formed a rocking soul band called Earl Lett and the Blendaires which played the hard-to-please Southern chittlin’ circuit. En route to a residency in New York the band cut a few singles including the insistent, collectable ‘Monkey’s Tail ‘. The group then secured a booking in Tunisia but returned in 1967, signing to Boston’s Wild Records. Success was hard to find so Earl set up his own label – Beantown – for which ‘Soul Sax’ became a minor local hit. More importantly it was espoused by the European underground and Earl crossed the Atlantic, working the European circuit for 18 months.

On his return, he landed a gig with Ike Turner’s Kings Of Rhythm and even enrolled at Boston’s Berkeley College to formally study the sax. Beantown Records continued and it was on that label that Earl released his only album – ‘Love Serenade’ –which showed that the time at college hadn’t rubbed any of the rough edges off his style.

With a unique sound that mixes elements of King Curtis, Dyke and the Blazers and Junior Walker, Earl Lett was one of soul and funk’s great one offs and you can catch up with all his best music and the details of his career on this album

THE STORY OF PROFESSOR EARL LETT is released on Tramp Records on September 2nd.