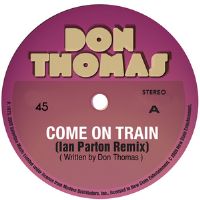 TV and cinema ads have been responsible for breathing new life into many an old soul chestnut. Latest tune to be revitalised in this way is DON THOMAS’S 1974 recording of ‘Come On Train’. THOMAS recorded the stomper for the NUVJ label and on release it did very little – till the good ol’ Northern scene espoused it and, latterly, copies of the single have been changing hands for sums approaching £100! The ad men seized the tune to front a Visa ad but first had hot shot mixer IAN PARTON add some 21st century tweaks to it. The result is still infectious and the beats perfectly complement the ad visuals which feature disabled performance artist BILL SHANNON’S crutch-dance shopping spree. Let’s hope, en route, he picked up a reissue copy of DON THOMAS’ ‘Come On Train’ (original and remix) … the reissue label is New State, by the way.