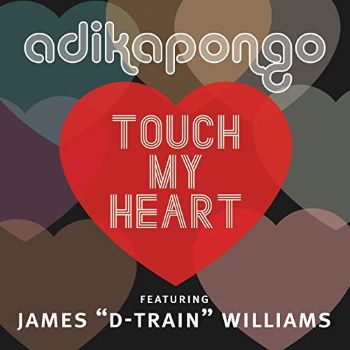 Last time we heard from the inimitable JAMES D TRAIN WILLIAMS he was working with US house music don, Lenny Fontana. Now he’s back with us, this time teaming up with Italian band ADIKA PONGO.

We first came across the wonderfully named Pongo crew in 2018 when one of their tunes surfaced on Expansion’s ‘Luxury Soul’ collection from that year. Then we enjoyed a Chic-flavoured dancer, ‘Diamonds’ which, in its tight Alex Di Cio mix won plenty of dance floor support.

Now Adika Pongo have just released another big dance tune, ‘Touch My Heart’ which features our old pal D Train in duet with the band’s lead singer who’s just known as Ms Francy and her smooth tones are a perfect foil for the Train’s gritty, soulful delivery. Those complimentary vocals ride over an energetic track that recalls the best of disco.

ADIKA PONGO: Touch My Heart’ out now on Expansion Records.