TOPS AND TEMPTS HEADING TO THE UK AGAIN 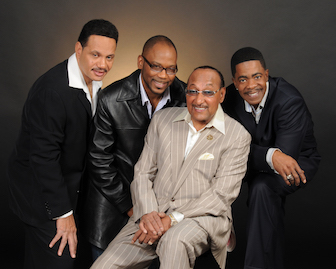 Calling all Motown fans – some exciting news just in! The legendary veteran vocal groups, THE FOUR TOPS (pictured left), and THE TEMPTATIONS (right) are going back on the road and heading for the UK later this year.

Both groups rose to fame at Berry Gordy’s iconic Motown label in the 1960s and quickly conquered the world. The Four Tops are well-loved in the UK, where they’ve racked up almost 30 Top 40 Hits (27 at the last count, including ‘I Can’t Help Myself (Sugar Pie Honey Bunch),’ and the chart-topping ‘Reach Out (I’ll Be There)’). The current incarnation of the group includes original member Duke Fakir plus Ronnie McNeir, Lawrence Payton Jr, and Harold ‘Spike’ Bonhart.

Like the Tops, The Temptations contain one original member from the group’s halcyon days – Otis Williams, who is joined by Ron Tyson, Terry Weeks, Larry Braggs and Willie Greene Jr. The Tempts hold the honour of being the first Motown group to triumph at the Grammy awards. More recently, the quartet that worked with producer Norman Whitfield in the late ’70s and early ’70s and scored memorable big hits with ‘My Girl,’ ‘Just My Imagination,’ and ‘Papa Was A Rolling Stone,’ won a Grammy Lifetime Achievement Award. Ahead of the keenly-anticipated UK shows,  Otis Williams says: “These songs are the soundtrack to our lives – we love performing them as much as ever, especially to the UK audiences.” His sentiments are echoed by the Four Tops’ Duke Fakir: “We love coming to the UK – this is our favourite tour and we love the people of the UK … and they treat us like royalty. They love the music which makes it wonderful to perform on stage every night.”  On the tour, both groups will be joined by special guests, as yet undisclosed.