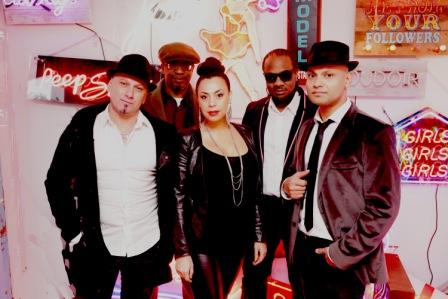 SOUL FUNK SECRET is a British band founded back in 2007 by Marco Abbatecola. Marco is a bassist and songwriter from North London whose CV includes collaborations with people like Incognito, Push, Galliano, Candi Staton, Nona Hendrix, Tony Coleman, Ola Onabule, and Martha High.

Soul Funk Secret is a music collective of players that Marco has worked with over the years and their current vocalist is Sulene Fleming – soul collectors will remember her work with Re:Grooved and the Fantastics. Together they’ve played at major music venues across the UK, Austria, Italy, Cyprus, Greece, France, Israel, USA and the famous Saint Lucia Jazz Festival.

The band’s single ‘Bright Sunshine’ was released back May 2014 and it quickly went to no 3 in the Radio UK Soul Chart. If you don’t know it, the tune’s big and brash with a jazzy undertow making it ripe for investigation. It’s being wisely re-promoted as the band prepares to release an EP in March.