TOO MUCH MONKEY BUSINESS…. 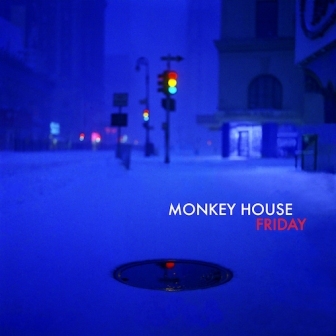 Not that well-known in the UK and Europe, L.A./Toronto combo MONKEY HOUSE has been together for 25 years. They are singer/songwriter/keyboardist Don Breithaupt, drummer Mark Kelso, bassist Pat Kilbride, and guitarist Justin Abedin. Their longevity has resulted in a tight sound and an obvious musical empathy. The band is all set to release their fifth album, ‘Friday’- a sophisticated 12 song mix of melodic jazz-tinged blue eyed soul with a subtle AOR undertow tied up in clever, intriguing lyrics and storylines…. very much like classic Steely Dan….

… and surprise, surprise the LP’s big cover is a Steely Dan song – well, not exactly. ‘Book Of Liars’ is in fact a Walter Becker solo effort (from his first, 1994 solo album). Breithaup says: “As a lifelong Steely Dan fan, Walter’s death hit me hard. I thought it’d be a nice gesture to do one of his.”

Another album highlights is the enigmatic closer ‘Islands Off The Coast Of America’ and though I can’t really say why, the intro on ‘Welcome To The Rest Of The World’ reminds me of Al Stewart’s ‘Year of The Cat’. And that’s the charm of ‘Friday’… it’s full of intrigue and interest.

Don Breithaupt says: “If you think of ‘Friday’ on a compass, it has moved a few degrees towards R&B, soul and blues as opposed to some songs on earlier albums that were more poppy or Beatles-derived.” See if you agree when the LP wins release on Alma Records on August 2nd.