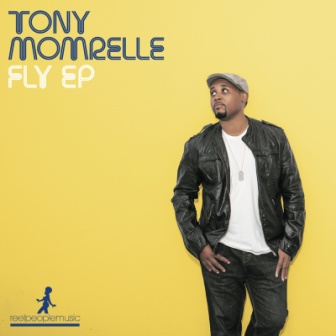 TONY MOMRELLE is one of the UK’s best kept soul secrets and it won’t surprise you to learn that Tony’s musical odyssey began in the church. Secular music beckoned him in his teens and word of mouth soon saw the professional work coming thick and fast and over the years Tony’s lent his backing vocal skills to people like Elton John, Terry Callier, Gloria Estefan, Celine Dion, Janet Jackson, Sade, Gary Barlow, Andrea Bocelli, Gwen Stefani, Gabrielle, Robert Palmer and many more.

Tony’s biggest success so far though has been his work with Incognito. A close collaborator with Bluey Maunick, Tony’s been an Incognito mainstay for ten years. Through all this Tony has cut his own solo stuff too. With a couple of full length albums to his credit, critics and fans alike have made comparison between his soulful vocal approach and Stevie Wonder’s.

Judge for yourself by catching up with Tony’s brand new 7 track EP, ‘Fly’. If you’re a listener to UK soul radio, you’ll already be familiar with one of the mini-album’s top cuts …. the fabulous ‘Spotlight’. The infectious mid-tempo, groove-heavy tune is on heavy rotation on the best soul stations and each play provokes huge listener interest. Easy to hear why… it’s a little beauty and one of 2013’s best single tracks, though another of the cuts – the more down tempo, ‘Everything’s Alright’ runs it very close. This one boasts a delightful harmonic hook and there’s a definite Steve W feel to the lovely melody.

More Stevie feel on the funkier ‘Get On Up’ while the Latin-tinged ‘Here It Is’ is gorgeous too. Add to these two versions of ‘Fly’ (for which the little album’s named) and you’ve got a great little soul package that no self- respecting soul home should be without. Find out more @ www.tonymomrelle.com