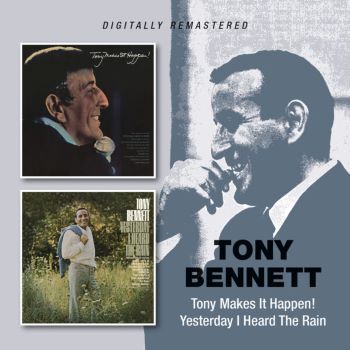 Latest offering from BGO Records is a “twofer” on veteran crooner TONY BENNETT which pairs two of his lesser known 60s LPs – 1967’s ‘Tony Makes It Happen’ and ‘Yesterday I Heard the Rain’ from the following year. They capture the now 94-year-old singer at one of his career peaks when despite the Beatles, the Motown sound and the advance of rock, the public still loved beautifully crafted and emotionally charged songs like Bennett’s ‘I Left My Heart In San Francisco’, ‘I Wanna Be Around’ and ‘The Good Life’. All huge hits, and their commercial success gave Bennett the leeway to produce albums that allowed him to cement a real artistic credibility, working on either jazzier material and/or offering new interpretations of material from the “Great American Songbook”.

The 22 tracks that make up the cuts from ‘Tony Makes It Happen’ and ‘Yesterday I Heard the Rain’ are indeed from that evergreen and wonderful catalogue. So, now digitally remastered, we can enjoy again Bennett’s svelte but never bland readings of material like Cahn/Heusen’s ‘What Makes It Happen’, the Gershwin’s ‘Love Is Here To Stay’ and Duke Ellington’s ‘Don’t Get Round Much Anymore’. There are some cuckoos in this nest though – like the ‘Chitty Chitty Bang Bang’ song ‘Hushabye Mountain’ and Blossom Dearie’s ‘Sweet Georgie Fame’. They are, though, the exceptions. In the main the music here is classic songbook – but all delivered in that magical, remarkable and unmistakable voice and here and there you can hear the singer having real fun changing the lyrics here and there – as on ‘On The Sunny Side Of The Street’ where instead of “if I didn’t have a cent I’d be as rich as Rockefeller” he substitutes the oil billionaire’s name for that of Harry Belafonte!

The sleeve notes for this twofer come via SJF’s Charles Waring – a guarantee for accuracy and insight and the CD is out now.