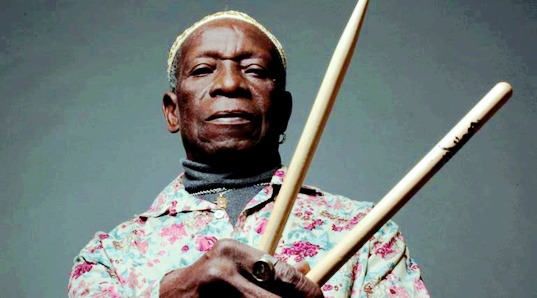 It has been announced that the legendary drummer, Tony Allen, who was a key architect of the Afrobeat sound, died at his home in Paris on April 30th. He was 79. So far, the cause of death has not been disclosed.

Born in Lagos, Nigeria, Tony Oladipo Allen started out in life as a radio station engineer but rose to fame in the 1970s as the polyrhythmic driving force behind Fela Kuti’s pioneering band, which fused jazz with funk and African rhythms to create a new idiom called Afrobeat. He appeared on over thirty Kuti albums, including the classics ‘Expensive Shit’ and ‘Zombie.’

After leaving Kuti’s band in 1979, he moved to Paris and established a solo career that yielded over twenty albums. Recently, Allen recorded for Blue Note Records and released an acclaimed album called ‘The Source’ in 2017. He also was part of the supergroup, The Good, The Bad & The Queen, alongside ex-Blur and Gorillaz frontman, Damon Albarn, recording two albums with them.

Allen’s most recent LP release is ‘Rejoice,’ a collaboration with South African horn legend, the late Hugh Masekela, which was released earlier this year.